I ended up getting “The Carbonator” cap from my LHBS to test out making my own pop. With the carbonator cap and a bottle of Torani syrup from Cost Plus World Market I was off and running in trying to make my own pop. At first I thought that it was going to be easy to replicate something like the old defunked New York Seltzer that I had as a kid. But after a couple of months and plenty of failed experiments, I’m finally starting to get close to a light but sweet flavor profile for a homemade pop.

The base recipe that I started with, was an Italian soda recipe that is on the Torani website. Lucky for me I was only making a ~20 fluid ounce batch at a time, so if the batch sucked I wouldn’t have a problem drinking about 2 cups of carbonated liquid verse a whole 2 liter bottle.

The big break for me in recipe development was after the second batch. Since with the first batch I used the Torani base recipe and the pop wasn’t sweet enough in my opinion. So for the second batch I increased the amount of syrup, and it didn’t help increase the sweetness of the pop. So while staring at the contents of my fridge for ideas, I noticed my recipe card for a lemon margarita on the rocks, and one of the mixers on the recipe card was homemade simple syrup (1 cup sugar to 1 cup water.) It was one of those breakthrough moments that you wonder why you didn’t think of it sooner. Like when Archimedes yelled “”Eureka!” in the bathtub, upon discovering how to measure the volume of an irregular object.

So after that small Archimedes like break through with using simple syrup, ever subsequent recipe was a quest to work on the ratio breakdown of raspberry syrup, simple syrup and water. Right now I’m on version 6, but I’m at the point of adjusting the syrups in the range of milliliters. Since when I originally started off, all the measurements were in tablespoons & teaspoons. But seeing how I was only making a 20 oz batch of pop, I had to convert the recipe it milliliters, since it was the only way that I could increase the precision for such a small batch and have any chance of repeatability in the final flavor of the pop.

In my opinion version 5 of the recipe is about as good as I can get the pop recipe using Torani syrup to replicate the flavor of New York Seltzer. If you like it a little more sweet, then go with v6. But for me, I’m going to stick with v5 for the time being. Below is the recipe for both v5 & v6: 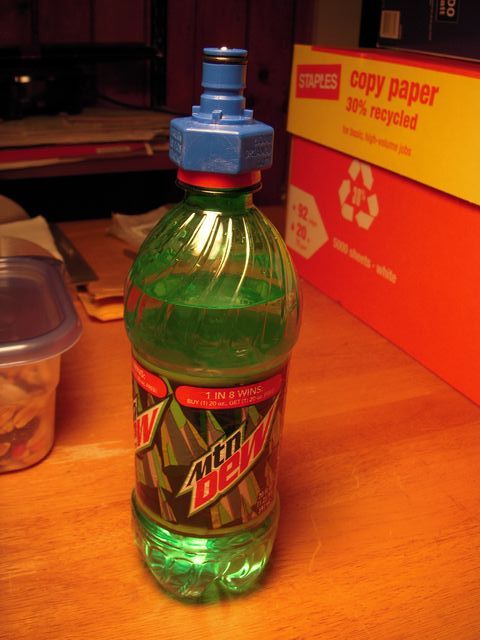